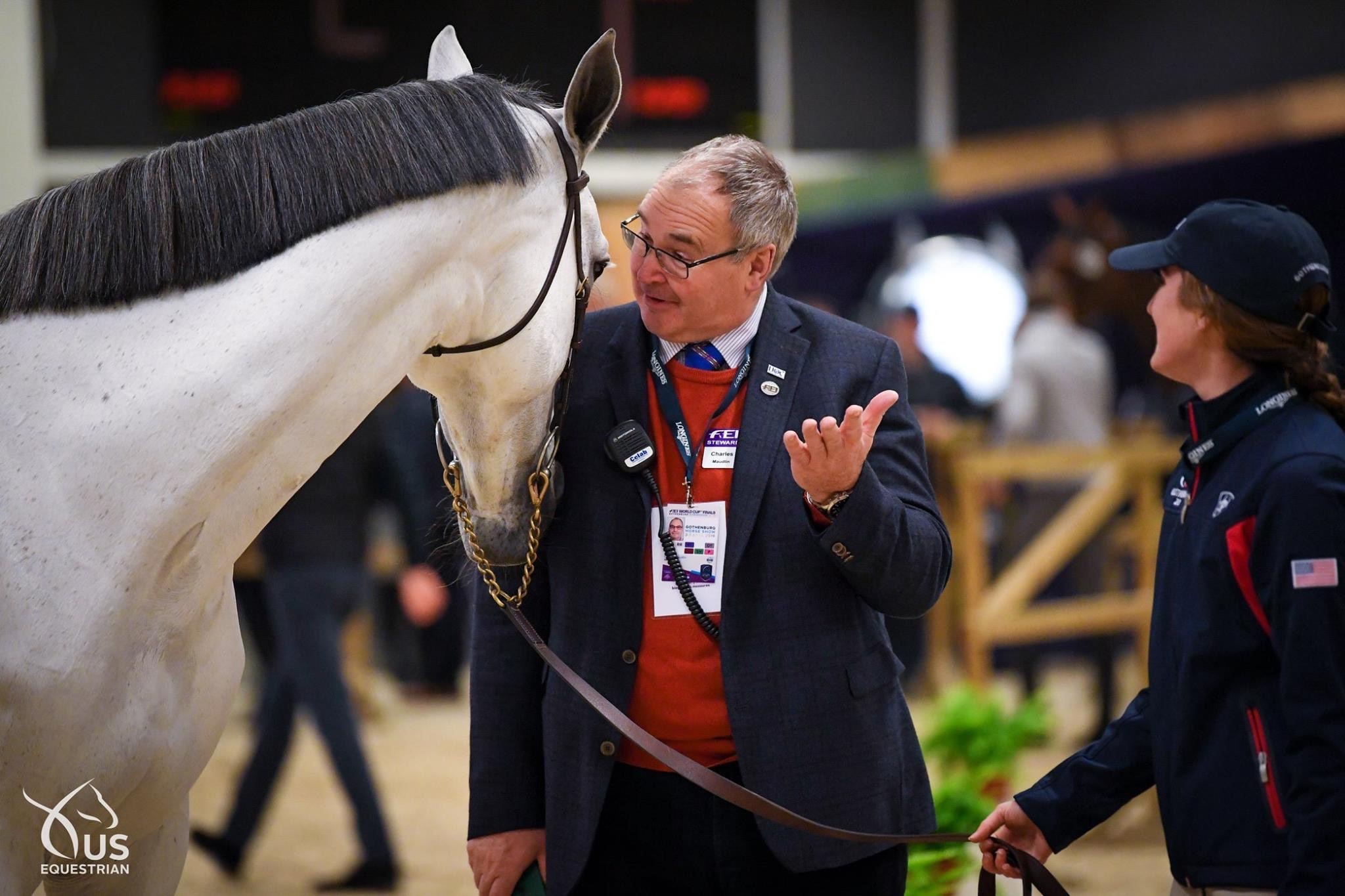 Have you ever wondered what goes on behind the scenes at both shows and at home? Our interview series is all about catching up with various individuals in this exciting sport and getting the low down on their lives. The ups, the downs, and everything in between!

This week we are extremely fortunate to be able to share an interview we conducted with Chief FEI Steward, Charles Maudlin, for our "10 Questions" interview series!

‍Tell us a little bit about your job as a chief steward and about how you got into the industry
About 15 years ago I was asked to form a Stewarding Team at the Dublin Horse Show, as there was a "need for more control in the National Classes".  From there, National Stewarding in Ireland was resurrected and after gaining more experience over several years I applied to become an FEI Steward.

Belfast was my first show- I was in the right place at the right time. I was lucky enough to go to the London Olympics as a FEI Night Steward early in my career and have been very fortunate to get some amazing opportunities since.

As a Chief Steward, the real work starts as soon as the schedule is published, drawing up the Stewards rotas, training timetables etc.  It is so important to manage your team well and utilize their strengths.  A good Chief Steward must see problems before they become issues and prevent incidents by being proactive, watching everything and being everywhere on the showgrounds.

What has been the funniest thing that has happened to you whilst stewarding at a show?
There are always lighthearted moments at shows, along with difficult times, but one that sticks out was in Moscow last year at the Olympic qualifier.  As the team qualifier parade was about to get underway, the heavens opened and rain fell in buckets.  Suddenly an official appeared with a box of umbrellas and announced that all the teams were to march around the arena on foot.  Watching them trying to stay dry under the umbrellas and avoid the puddles certainly cheered everyone up on a very tense and wet day.

What are some of the most satisfying and most frustrating parts of stewarding?
I find helping and advising riders and grooms on rule clarifications, ensuring they all compete on a level playing field, and helping to make the whole show run smoothly extremely satisfying. However, the disregard shown to grooms and stewards from show organisers by putting on really late classes, or having so little time to exercise horses during the day that a typical showday might run from 5am until well after midnight is extremely frustrating.

What are some unusual requests you’ve received from riders over the years?
During the Rio Olympics everyone arrived with, fridges, freezers and washing machines that did not work on the local power supply.  We were running around trying to source adaptors to stop fridges warming everything up instead of cooling down!! At the same games, one Federation couldn't get any power to their container that contained a fully equipped Physio room, even though 3 phase power was connected.  After 3 days I found that the master switch had been installed upside down!!

What has been the highlight of your stewarding career to date.
I have been very lucky with some of the shows I have been invited to as a steward.  Being appointed Overall Chief Steward at the 2018 Asian Games was certainly a major highlight, (and challenge) and I am really looking forward to being Chief Steward at this years Nations Cup final in Barcelona.

What is the funniest story you can share from an Olympic Games?
Late one night during the London Olympics, a rider arrived at the stables where I was on night duty.  He still had the medal he had won around his neck, but wanted to get into the stables to change out of his riding clothes.  He was of course surrounded by friends and family and everyone was "very merry".  Trying to maintain some sort of order whilst also trying to get just him into the stables was quite a challenge.
Another "funny" was in Tokyo last year at the Test Event.  I was checking the fire hoses were working and turned the tap on one of them, just to see if there was water.  Suddenly every fire alarm, siren, and alert light went off, 20+ security men and maintenance officials appeared and there was chaos for 20mins whilst everything was switched off again.

Challenges of being an Olympic Stable Manager.
The biggest challenge is trying to be fair and equal to every nation.  It is very easy to agree to a request from one country, and then find 30 other countries wanting the same.  This happened in Rio when we tried to set up a sunscreen to stop the late afternoon sun going straight into some of the stables.  Once it was installed, (and it was quite a challenge), everyone wanted a sunscreen.  Unfortunately there was no more available and there were a lot of disgruntled Nations.

What is one piece of advice you would give someone looking to get into stewarding?
Firstly, be patient. It does take time.  At least several year Stewarding at National shows, learning the rules and learning how to read situations.  Then there are exams.  The more experienced horse-person you are, the easier you will find it.
You will need even more patience at shows on becoming a FEI Steward. - Very long days, and, nothing will happen, just because you are there and you are good, because you have prevented problems with your presence.

What is your favourite show?
Goodness, that is tough, because every show is different. (And I will get killed for not mentioning some).
Gothenburg for the friendly team.
Aachen for facilities and history.
But I am going to say Olympia. So well run and It's Christmas.

And finally... who is your favourite horse and/or rider at the moment?
As a FEI Steward I have no favorites!!!!!
There are some great Characters in Show Jumping, some riders whom I respect and some that can try my patience, but no favorites.

Thank you, Charles, for taking the time to speak to us!