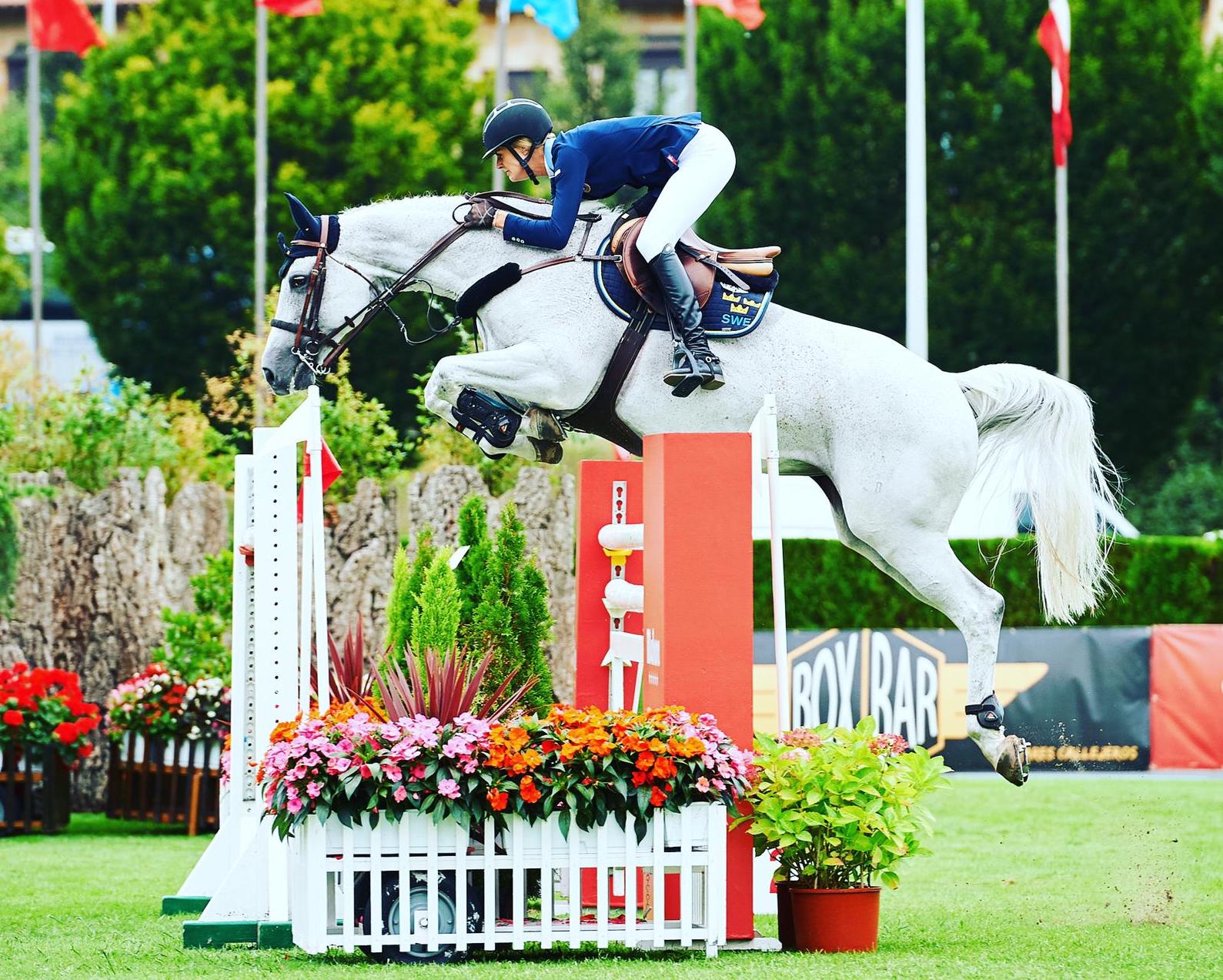 Have you ever wondered what goes on behind the scenes at both shows and at home? Our interview series is all about catching up with various individuals in this exciting sport and getting the low down on their lives. The ups, the downs, and everything in between!

This week we are extremely fortunate to be able to share an interview we conducted with top Swedish international showjumper, Annika Axelsson, for our "10 Questions" interview series!

When did you start riding, and what are some of your earliest memories in the saddle?
I started to ride at a riding school in Vinslov (a small city in the south of Sweden) when I was 6 years old. The riding school was five minutes from our home so I cycled there every day, it was really nice. When I was 9 a new lady took over the riding school and she let me ride lots of ponies and I started to do a lot more.

Tell us about your first horse or pony...
Shortly after I began riding more, I got my first pony. The pony was called Petra and she was 19 years old but she was the fastest pony you could have so we won a lot. She was very special, once you started cantering that was all you could do. You'd get a few jumps in and when you got her into the ring you'd have to hold her to the side until the bell went, at which point she would just take off and usually win the class!

How do you handle the pressure associated with the sport?
I worked with a mental coach for a number of years, particularly on how to prepare for shows, recover from bad rounds, or prepare for big important classes. I try to work on that a lot, focusing on positive thoughts before going into the ring and reminding myself that I do this because I enjoy it. I try not to put too much pressure on myself but it can be difficult at times, especially as I do this as a business and need to keep selling horses. I would say that the pressure doesn't only come from the sport itself but the financial aspects and business considerations which can be difficult at times. I try to surround myself with good people and have a nice support team around me, that definitely takes off a lot of pressure, knowing that everything around me is working well. I also like to do breathing exercises before going into the ring which help me, and I remind myself that I'm lucky to be doing what I love every day and to have reached the level I'm at today, which I wasn't sure was going to happen for many years.

What do you do to unwind or relax?
I love to go for nice dinners with good friends, or cook good food at home and have a glass of wine. I also enjoy watching movies or reading. It's important to appreciate down time because, for all of us in this sport, we work a lot and are away from home a lot. I think it's important to try and take some time for yourself to clear your mind. I also like to be able to be at the stable and be just enjoy being around the horses without any added pressure. Even at shows I try to go sit by my stables and get some quiet time away from everyone.

What horses are on your team this season?
This year I'm very lucky to have some great horses on my team. First I have W Diva Rosa MFS who is my best horse, she did so many great things last year in the bigger classes and had a lot of placings in big Grand Prix's and 5* classes. She's very special to me and it's thanks to her that I'm at this level. Next there's Cleo Z, I've had him since he was a 5 year old and is probably the best horse I've ever had. He has so much scope and he's so careful. I've been trying to build him up slowly to the big classes and he recently jumped his first Grand Prix and was clear. Then there's Haloubet Hitchcock who was with me in Doha and has a lot of experience jumping with Peter Devos, I'm really lucky to have a horse of his caliber in my stable. Next there's Bellona Olympic Z who is only seven but is probably the horse who wins or places the most. She gets one or two top three placings at almost every show we go to. Then there's Cornet's Fire Z who is only six but has been jumping clear rounds all season. I also have a nine year old called Byinintot des Carmille who I hope can soon step up and jump the ranking classes. Those are the horses I would consider on my top team but I also have a lot of young horses in and some dealing horses.

Do you have a coach you work with at home?
I've been working with Jeroen Dubbeldam for the last few months which I'm really happy about. I think he's one of the best riders in the world and has a great system for building the horses up, as well as being a great horseman and a great person in and out of the sport. He's very detail oriented and we work a lot on the flat and in between the fences, not only focusing on clearing fences. I really appreciate the time he takes to help me and I feel lucky to have him as a coach.

Who do you currently admire in the sport?
I think that this is a difficult question as there are so many good riders out there. First I would have to say Jeroen, not only because I train with him but he has also won a lot of medals and has been on the top level and produced horses for the top level for so long. I also admire Steve Guerdat and Beezie Madden. Those would be the three riders I currently look up to the most.

What would you consider to be your greatest strength?
I've always been a hard worker. I come from a very normal family who couldn't afford to buy top horses but did what they could to support me in every way possible. I have always been used to working hard which is something that has helped me reach the level I'm at today. I think I sometimes still need to learn to work smart and not just hard but having this trait is always going to take you far. There are so many people who are willing to work hard in this sport so if you're not willing to do what it takes, no matter how much money you have behind you, I think it's very difficult to be successful in this sport.

And how about your greatest weakness?
I often try to do too many things at once which sometimes can result in things not being done 100%. I find it difficult to say no to people and often take on too much which makes it difficult to find the time to do things as well as I'd like to be able to do them. This is definitely something I need to work on, doing slightly less but doing them 100% instead of just halfway and taking on too much.

What would you consider to be your long term plans?
My long term plan, sport wise, is to jump in a championship. Hopefully that happens next year, but if not then further on. It would be great to become a more stable part of the Swedish team and be considered more in the next few years. Business wise, I think I'd like to build my business up to the point where I could possibly have slightly fewer horses and always have one or two students with me and be able to focus a bit more on the training side of things. It would be nice to build something on the side asides from riding in order to prepare for the future. For the next couple of years, however, my focus is on the sport, especially when I have such good horses. I want to try be at the highest level and continue to jump at the big shows, as I did last year and at the beginning of this year. Now with the Coronavirus a lot of things have changed for a lot of people, it gives you a chance to reflect on and appreciate everything as we all now see how quickly everything can disappear.

Thank you, Annika, for taking the time to speak to us!

Keep an eye on our website and social media pages for several more interviews which will be published in the next few days!